The first book in a clever but also quite unusual crime series in which Queen Elizabeth the second secretely solves crimes. 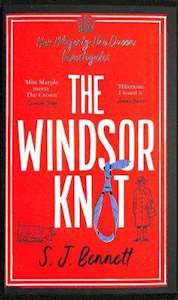 Queen Elizabeth is about to become 90 years old and is staying at Windsor Castle planning for the celebrations to be had. But one morning a guest is found dead in one of the castle bedrooms. A young russian pianist seems to have strangled himself by accident, but a badly tied knot leads MI5 to suspect he was murdered. A big but highly secret investigation follows but when time goes by and MI5 is getting nowhere and the Queens staff becomes more and more unhappy the Queen steps in. Only since she is the Queen she can't go about asking questions, therfore she has to rely on her Assistant Private Secretary to do that for her. The thinking and solving is all hers though.

This is a highly entertaining crime novel but also an engaging portrait of the Queen and her way of life. There is a sequel on the way.