The Kiss of Deception

The kiss of deception 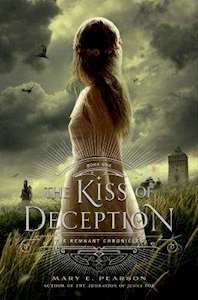 A princess flees on her wedding day. She steals ancient documents from the Chancellor's secret Collection. She is pursued by bounty hunters sent by her own father. She is Princess Lia, seventeen, First Daughter of the House of Morrighan. The Kingdom of Morrighan is steeped in tradition and the stories of a bygone world, but some traditions Lia can't abide. Like having to marry someone she's never met to secure a political alliance.

Fed up and ready for a new life, Lia flees to a distant village on the morning of her wedding. She settles in among the common folk, intrigued when two mysterious and handsome strangers arrive—and unaware that one is the jilted prince and the other an assassin sent to kill her. Deceptions swirl and Lia finds herself on the brink of unlocking perilous secrets—secrets that may unravel her world—even as she feels herself falling in love.

The plottwist in this book i freaking amazing and makes you want to read the book over and over again just to exepience the amazing chock and amazment you felt the first time.

I recomend this book to everyone who likes to read great books, this book is great it contains romance, action , suspense and a amazingly planned plottwist that you certainly will not  see coming.
Betyg: 5. Toppen