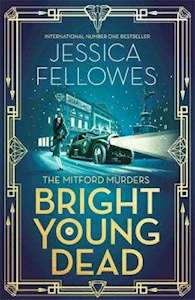 The mystery solvers in this book are the same as in the first book. Louisa Cannan, nursery maid to the Mitford children and Guy Sullivan, sergeant in London's Metropolitan police. A murder take place at the Mitford estate during a masquerade ball in 1925. Among the visitors are several young men and women known as the Bright Young Things. They have arranged for a treasure hunt to take place after midnight. It ends in death for one of its participants. A maid is arrested but Louisa is certain she is innocent and sets out to find the real culpriter.

The Mitford murders serie is based on real people (The Mitfords and many of their friends) and real historical events but it is fiction and the murder taking place in the book never happened in real life. This is a book for those who like to read about the English upper class life during the 1920's. The murder investigation adds an extra spice to the novel.