Nothing ventured is a spinoff of the Clifton chronicles introducing detective constable William Warwick. But be warned, this is not a detective story, this is a story about a detective. Written by a very good storyteller. 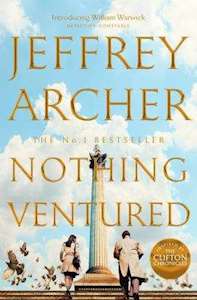 Archer's Clifton saga centered around Harry, a fictional character, who worked as an author. Harry's series starred William Warwick and this is the first book about his life.
When William graduates from university he decides to join the Metropolitan Police Force instead of becoming a barrister like his father. He has wanted to be a detective since he was eight years old. William starts on the beat, eager to prove himself. He's intelligent and works hard and is soon transferred to Scotland Yard as a detective with the Art and Antiquities Squad.  His first high-stakes case is the theft of a priceless Rembrandt painting. It’s while he is investigating this case that he meets Beth Rainsford, a research assistant with a secret, who he falls hopelessly in love with. Can William outsmart suave art collector Miles Falkner and crack the case?