"Ani FaNelli is the woman you love to hate. The woman who has it all. But behind the meticulously crafted facade lies the darkest and most violent of pasts..." 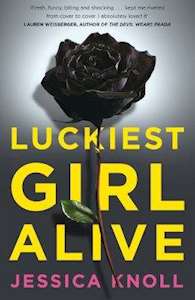 " Jessica Knoll's debut novel follows a young woman striving to create the perfect life--husband, home, and career--until a violent incident from her past threatens to unravel everything and expose her most shocking secret of all.
As a teenager at the prestigious Bradley School, Ani FaNelli endured a shocking, public humiliation that left her desperate to reinvent herself. Now, with a glamorous job, expensive wardrobe, and handsome blue blood fiance, she's "this close" to living the perfect life she's worked so hard to achieve.
But Ani has a secret.
There's something else buried in her past that still haunts her, something private and painful that threatens to bubble to the surface and destroy everything.
With a singular voice and twists you won't see coming, "Luckiest Girl Alive "explores the unbearable pressure that so many women feel to "have it all" and introduces a heroine whose sharp edges and cutthroat ambition have been protecting a scandalous truth, and a heart that's bigger than it first appears.
The question remains: will breaking her silence destroy all that she has worked for--or, will it at long last, set Ani free?"